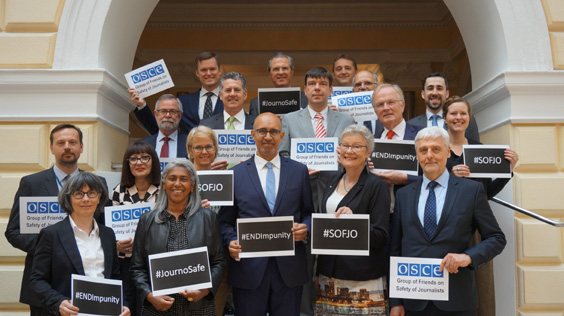 At the initiative of the French, Lithuanian and Swedish Delegations to the OSCE, Ambassadors and Delegates from 15 Participating States met today in Vienna to launch an informal OSCE Group of Friends on Safety of Journalists.

As part of OSCE’s comprehensive acquis on freedom of expression and media freedom, participating States condemned all attacks on and harassment of journalists in Budapest 1994. International obligations and commitments on safety of journalists have continued to evolve, including in the UN, Council of Europe and OSCE. However, multifaceted threats faced by journalists and other media actors are on the rise across the OSCE area. Journalists lose their lives because of their work, others face judicial harassment and intimidations, offline as well as online, impunity for threats and violence against journalists prevail, and women journalists experience specific challenges.

Participants in the informal discussion included the OSCE Representative on Freedom of the Media Harlem Désir, the President of Reporters Without Borders Austria Dr. Rubina Möhring and the Head of the Department for International Law, Human Rights and Treaty Law of the Swedish Ministry of Foreign Affairs Dr. Gustaf Lind. The debate focused on how the topic of safety of journalists – in its broad understanding – could be kept high on the OSCE agenda by strengthening implementation of commitments and raising awareness.

“Safety of journalists is my first priority and I welcome the initiative to establish a Group of Friends on Safety of Journalists at the OSCE, following similar initiatives in the UN format in New York, Geneva and Paris”, said the OSCE Representative on Freedom on the Media, Harlem Désir, “We need to work together to combat the unacceptably high rate of impunity for crimes against journalists. Impunity leads to chilling effect and self-censorship from reporting on challenging issues facing our societies.”

The participants of the inaugural meeting emphasized the need to reinforce international efforts promoting safety of journalists. They agreed that the OSCE Group of Friends could be used for joint initiatives in this area as well as regular exchange of information.

The Safety of Journalists Group of Friends gathers a group of delegations, representing countries particularly active and engaged in the field of safety of journalists in multilateral fora, including within the UN framework. The OSCE Group of Friends founding members are Austria, Canada, Denmark, Estonia, France, Germany, Greece, Latvia, Lithuania, Montenegro, Netherlands, Norway, Sweden, the United Kingdom and the United States of America.